New parish in the Antiochian Diaspora

By canon law the (arch)bishop assignes a priest to take care of the believers in an area. This happened also for the Antiochian parish in the Netherlands.
The beginning was searching for the parishioners that were scattered in different places of the Netherlands. This search for Antiochian families was followed by an essential step: to create a council that helps the priest with all the details of parish life. The first task of this council was doing the database of parishioners in order to have the primary image of the numbers and addresses.

The Divine Liturgy is the climax of the Orthodox liturgical life. The real and declared beginning of the parish is when people loop around the Holy Eucharist, which is the center of Christian life. For the Antiochian Orthodox liturgical life began somewhat irregularly by participation in the Greek and Russian Orthodox parishes in many places of the Netherlands. I held independently the first Divine Liturgy of the parish, with Easter 2015. It included most of our parishioners that had been waiting for a long time to hear the Word of God and to participate in the Holy Eucharist.

The parish and sacraments 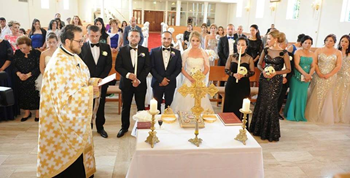 For Orthodox the Sacraments are important steps in their lifes, especially Baptism and the marriage services. Therefore, the need for the establishment of a church in the Netherlands appeared to respond to these steps, as some families were not giving the Sacraments to their children and other ones went to other churches in the Netherlands, like Oriental churches or local Catholic churches.

The Orthodox Church believes in the royal priesthood (1 Peter 2: 9), so all members of the parish are “priests” in the community in which they live, in the sense that they gather around Jesus Christ in the church of their lives. From this point the priest noted some members of the parish in order to help him, according to the talent given to each of them by the Holy Spirit. The church uses the term "synergy" to express the cooperation between the priest and the people. So by canon law, the priest gives the missions to some members of the parish to work together in the parish administration. As already said, the parish council began to configure a database of the members of the new parish for the link between them and the Church. On the other hand, the urgent need in this time is in the caring of the newly arrived in the asylum centers in the Netherlands, now that their numbers are increasing.

From the Church to the church

In the Orthodox faith, before being an building or an association, the Church is the People of God. New churches that are newly established in the Netherlands are called “immigrant churches”. These churches were founded first in the souls of immigrants who because of various circumstances came to the Netherlands, but who are still carrying their church with them. This existential link with the church is because of their faith on one hand, but also because of their heritage and social environment in which they were living in their home country.
Thus the church for her members is the life of the believer wherever he lives. The existential link between the believer and the church is in parallel with the urgent need to find a place where believers can meet with each other in order to express their common faith. The Antiochian Orthodox parish in the Netherlands initially hired some of the other churches to respond to this need. And this despite the financial difficulties and also the difficulty to find the required specifications to suit the need of the parish. At present, the parish has been able to find a church building in Amersfoort where she can gather her children once a month.

The new parish in Dutch society 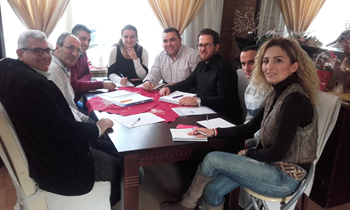 In the beginning, it is difficult for new immigrants to integrate into the communities in which they are settling. This is the case of all migrants to Europe, and is the case with our new parish as well. The basic things of life are different between the Motherland of the Church members and their new homelands. Believers in their homeland were used to many daily rituals, but in the new homeland they were obliged to adapt to a new place and community. Through the new parish experience, acceptance of Dutch society and offering respect for the newcomers and quickly in order to provide them with helps, are facilitated the mission of the parish and give it an spiritual warmth.
At the legal level, the parish found that it should be given a new legal status of the church in the Dutch law, so the church registered in the Chamber of Commerce as a new church in the Netherlands under the name of "the Antiochian Orthodox Church in the Netherlands."

Through the new parish experience, the immigrant churches are facing some important challenges in general at the beginning of their work: place, financial support, vast distances between places of parishioners and language as a key to connect with the new society.
In the life of its children the Church takes the role of the hospital. It is the place where a person comes to take a spiritual medication that cannot be granted by any other doctor. This role cannot be achieved in reality, if the basic facilities for the parish aren’t realized. Therefore, the right place is very necessary for this parish in order to be able to do its basic mission. This issue also mainly relates to the financial income of the parish. Because the majority of members are refugees, the parish gets low income.
The pastoral care of the priest is a dual action. The priest is visiting members of the parish in their houses caring them spiritually, while at the same inviting them as Nathanael was invited, "Come and see" in order to express their affiliation to the Church in the Eucharist with other people. So another challenge in the new parish is the distance of members’ places from each other. It makes the pastoral tasks of the priest difficult and creates a suffering in the direct and rapid communication between the parishioners. And this while the believers in their homelands were used to the fact that the church is located nearby and the priest lives in the same area where they live.
Language plays also an important role in the cause of the inability of the members to be integrated into other churches, such as the Dutch Churches or Oriental Orthodox churches. And this is in addition to the rituals that they are accustomed to and in which they are used to express their faith, this giving them also a sense of warmth of the house.

The parish and other churches

The Antiochian Orthodox Church is characterized by openness to others, it believes in the ecumenical movement. Especially the Middle East includes various other Churches: Catholic, Evangelical and Oriental Orthodox.
The Antiochian Orthodox parish made relations with other local churches and also with migrant churches that have preceded us to this country; it beliefs in the ecumenical work of the Christian that appears church existence as a one unity “In One, Holy, Catholic, and Apostolic Church” (The Orthodox Creed)

The new parish believes that this mission is apostolic in the sense of the Gospel. This is in particular true where the parishioners are looking forward to realize and to hold the church in themselves first, and then secondly in the church as a building and an institution. The Biblical sense is emphasized by the Apostle Paul when he speaks about the deliverance (Paradosis) as that are receiving the mission then handed over to others.
The efforts of creating a new parish in a new land with a new language is the work of the Apostles themselves. It is this motivation that makes the children of the Church sacrificing themselves for the glory of the Lord Jesus Christ.
Finally, the new parish in the Netherlands is looking forward to more progress in the work, management and cooperation with local churches in order to face all the challenges for providing better care for its children to be fused where then they are the church.