The author, Mgr. Dr. Gerard de Korte, as is well known, will soon be consecrated the new bishop of ‘s-Hertogenbosch in that city’s Cathedral Basilica of St. John the Evangelist. In this book, he invites Catholics and other Christians of Protestant confessions to take up the challenges the Church currently faces both internally and externally, namely, a “consciousness of uncertainty and relativism, of confusion and discontent.” In nuce, this consciousness is an expression of the crisis that orthodox Christianity is laboring under regarding its truth and rationality. How did we get here?

Briefly, a process of secularization has over time undermined orthodox Christianity. In response to the Enlightenment critique of Christological and Trinitarian dogmas, some Christians embraced Deism. Jesus Christ became a moral teacher. The revealed truth of his atonement—the cross, resurrection, and ascension of Christ—was abandoned as contrary to reason. Deism’s concept of God was that of a God who creates the world but then takes a “hands-off” approach, leaving creation to run on its own steam. Deism is a half-way house to atheistic naturalism. Naturalism affirms that God does not exist, that nature is all there is, and man is just a part of nature. The naturalist holds to Materialism: man is just the chance product of impersonal matter-in-motion. The so-called “masters of suspicion,” namely, the trio of Marx, Nietzsche and Freud, also contributed to the worldview of naturalism. Their views promoted the idea that God is just a projection of the human mind, of man’s needs. Naturalism gave rise to Nihilism. If naturalism is true, then in such a world the objective value of human beings does not exist. More particularly, if God does not exist, then why believe that there are justifiable grounds for holding that human beings are singularly unique, have dignity and rights?

The upshot of this process is that faith and reality are disconnected. This has resulted in a subjectivist view of religion. Religion is a purely individual matter, a matter of feelings. Religious claims do not involve assertions about objective reality, and hence religious claims are made without regard to truth and rationality. Belief in God has “become a contested option.” In sum, there is now a “relativizing of the question of truth.” Indeed, truth has become a completely subjective matter. Thus, experience becomes the measure of Christ. 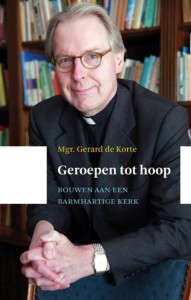 What is Bishop De Korte’s response to these challenges? One, Christians must avoid the dilemma of accommodation to or isolation from the dominant culture. Both horns of the dilemma lead to irrelevance for the Christian’s proclamation of the gospel. Put differently, we must avoid both confusion and rigidity about the Christian message. Of course, the Church must be both clear in its message, having a strong Christian identity, and open to dialogue. Two, the Church needs a hermeneutics for reinterpreting the affirmations of faith in order to meet truly the challenges the Church faces in contemporary culture. He insists that a distinction should be made between the truth of dogma and its various linguistic formulations, between form and content, a distinction that made possible internal renewal within the Catholic Church at Vatican II by virtue of rediscovering the riches of the sources of the Christian faith. This is what the bishop calls “open orthodoxy.” In this connection, he aligns his project with Pope Benedict XVI’s “hermeneutics of continuity and renewal” over against a “hermeneutics of discontinuity and rupture.” The bishop is especially sensitive to the historical context of theologizing, the historicity of our linguistic formulations of dogmas, the inadequacy of these formulations (apophaticism), because God is always greater, such that no statement about God completely expresses him, distinguishing between the Church’s living tradition and traditionalism. These “dogmas are linguistic stipulations [“spreekregels] of the Church; guard rails [“piketpaaltjes,” literally: picket fences] for our theologizing.”

Three, the Christian anthropology of Catholic social teaching is especially relevant for addressing the crisis of the human person that was spawned by Naturalism and its corresponding Nihilism. Let us recall the gist of the crisis. If naturalism is true, then in such a world the objective value of human beings does not exist. More particularly, if God does not exist, then why believe that there are justifiable grounds for holding that human beings are singularly unique, have dignity and rights? Catholic social teaching has five major elements: the dignity of man, personalism, solidarity, the common good, and subsidiarity. Pared down for my purpose here, since nihilism denies man’s humanity and his very identity as a human being, the bishop states in response: “All men are unique by virtue of being created in God’s image; they have an inherent dignity. The human person is not a loose atom [as individualism claims] but rather comes to fulfillment in relationship to God and his fellow man.”

Finally, Bishop De Korte grounds his reflections on the notion of the covenant, which is an overarching divine foundation for creation, fall into sin, redemption in Christ, and the eschatological consummation of God’s plan of salvation. God’s covenantal relationship with the creation, in particular with man, who is the crown of creation, pertains not only to man’s stance toward the creation, but chiefly to God’s relationship with man. Man has broken his covenantal relationship with God throughout the history of redemption. He has sinned against God and bears the objective guilt of those sins. But our guilt is never the last word. God has remained faithful to his covenant, forgiven man of his sins, and called man repeatedly back to a saving relationship with him. The concentration point of this redemptive history is the atoning work of Jesus Christ, the Incarnate Word, Lord and Savior. Thus, the gospel calls us to conversion, repentance, and new life in Christ, by faith, through the power of the Holy Spirit.

In conclusion, I will, respectfully, make some critical remarks. Mgr. Korte’s project of “open orthodoxy” lacks an account of the relationship between meaning and truth. This project brings us to the issues of meaning and truth in the hermeneutic of re-interpreting the affirmations of faith. Perhaps the most evident showing that an account of this relationship is missing is found in his speaking of dogmas as “linguistic stipulations” or “guard rails” for the Church in its perpetual theological reflections of the tradition. Undoubtedly, the bishop affirms, for example, the creeds of Nicaea and Chalcedon to be objective truths about reality. Yet, he never discusses the chief challenge to the Church, indeed, crisis of Christianity in our culture, namely, the relationship between faith and reality. In short, Nicaea and Chalcedon were making linguistic stipulations, putting down guard rails, to protect objectively true affirmations.

Furthermore, although the bishop rightly aligns his project with Benedict XVI’s hermeneutics of continuity and reform, he never gives an account of the nature of continuity. Indeed, with his emphasis on the “hermeneutical openness” of orthodoxy, dialogue, apophaticism, historicity, in short, the inadequacy of dogmatic formulations, because we don’t possess the truth, but rather it is a gift, the question of the nature of continuity is never raised and, indeed, may all too easily get lost with this emphasis. Moreover, his hermeneutical project of “open orthodoxy” reflects the influence of the nouvelle théologie and hence of Vatican II’s legacy. Hence, a distinction can be made between truth and its formulations in dogma, between form and content, content and context such as was suggested by John XXIII in his opening address to Vatican II, Gaudet Mater Ecclesia: “The deposit or the truths of faith, contained in our sacred teaching, are one thing, while the mode in which they are enunciated, keeping the same meaning and the same judgment [‘eodem sensu eademque sententia’], is another thing.” Briefly, the pope’s statement raised the question of the continuity or material identity of Christian truth over the course of time. How would Bishop De Korte address this question?

There is also the question regarding the crisis of reason in De Korte’s response to the challenges of secularism. The truth-attaining capacity of the human mind is in crisis in our culture. The Church’s teaching holds that assenting to the truth of Christianity is a reasonable matter. Indeed, not all knowledge of God, of his existence, of making sense of the universe’s existence, of its intelligibility, of the human person’s existence and distinctiveness, and so forth, purely a matter of faith, of grace. Isn’t Christianity a reasonable faith? Bishop De Korte suggests that all knowledge of God is purely a matter of grace. But this sounds like fideism, which exclusively relies upon faith alone in the search for religious truth. The Church holds, however, to the legitimacy of natural theology and metaphysical reasoning about God. What is the relationship between faith and reason, according to Bishop De Korte?

Finally, the bishop’s understanding of Catholic social teaching omits any reference at all to the concept of natural law. But there is a crisis of nature, that is, of the fundamental structures of human reality as God created them. Corresponding to this notion of nature is the natural law, upon which human rights and responsibilities, and human dignity, are grounded. The notion of natural law, as a law of God in creation in principles accessible to all men’s natural moral reason without the revealed law, is integral to Catholic social teaching because it provides common ground for moral reasoning in a pluralistic society. Why doesn’t it merit even a mention in Bishop de Korte’s account of the essential points of Catholic social teaching? Is there a connection between what appears to be fideism in his theology and his overlooking natural law reasoning?

I heartily commend Bishop De Korte for his excellent book, and prayerfully hope that many will read it and be stimulated to respond to the gospel of Jesus Christ.