It needs some initial clarifications before reporting on the ecumenical movement in Bangladesh. The reality of Christianity and its practices in Bangladesh is always very challenging due to other existing religions especially Islam, geographical or environmental and economic realities. Bangladesh is a beautiful country on the delta of the Ganges and Brahmaputra. The land of 147,570 sq. km. carved out of a thousand rivers, is a very small place for an impressive population of almost 170 million people.

Among the people, 88% are Muslims, 10% are Hindu and Buddhists, less than 1% is Christians and the rest are tribal.  The majority of Bangladeshi lives in rural areas depending on agricultural products. The country is exposed to storm, hits of cyclones and severe floods. The monsoon rain disrupts communications and frustrates the hard labor of the poor farmers. The temperature is very fluctuating. It is 7 degree (minimum) Celsius during the winter and 38 degree (maximum) Celsius in the summer. It is very pleasant that presently literate people is found from every family of Bangladesh. The problem is with higher education, which is closely related to the other basic problems, i.e lack of basic awareness, land loss, low income, socially disorganized, illness and environmental degradation. The problem has been impacting negatively in the whole livelihood of the people. The majority of the people are poor who live from hand to mouth. Their average daily income (per person) is Tk. 150 BDT (2 USD).

Christianity was first preached in Islam dominated Bangladesh, at the end of 16th century. Christianity is a religion of minority though it is almost 500years since the first preaching of Christianity here. There were many hard times that tested the faith of many. But God showed us His love and care through the hardest of times. Particularly during the last few years, the influence of Islam has been increasing in this country. Although the attack on Christians in this predominantly Muslim country is rare, the group of fundamentalists is putting more and more pressure on the government to introduce the Islamic law. We have always a deep concern about having better and peaceful cohabitation of the people of different Religions presently in Bangladesh. 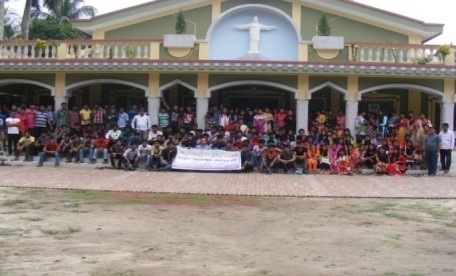 The Episcopal Commission for Christian Unity and Interreligious Dialogue, Bangladesh, organizes regular ecumenical activities in the diocese level aiming at unity among several Christian denominations.[1] The initiatives are taken in this regards that we may survive and sustain our Christian faith together being the followers of the same Lord, Christ Jesus.

The regular ecumenical activities are as such: a) observance of Unity Octave; b) inter-Church training course; c) inter-Church prayers and meetings; d) seminars according to yearly theme announced by the Pope for the universal Church; e) theological seminars for students of theology from different seminaries organized by the “Theological Association of Bangladesh”; f) programs with Shalom Movements; and g) programs on several themes in accordance with the consent of different Churches. To promote the unity among Christians, there are also some correspondences and publications to make our communications more lively, strong and visible. For example: i) Oikytan Bulletin; ii) Unity Octave booklet; iii) Mass Kit for Harmony Day Celebration; iv) Sending letters and invitation cards to each other in different occasions etc.

Ecumenical movement in Bangladesh seeks to ensure the cooperation and unity among Christians. To promote this visible unity in one faith in Christ, the church leaders make the continuous dialogue on theological principles, vision and goals, the true understanding of unity, the way of Christian life, renewal and conversation among ourselves through spiritual exercises together etc. The unity and cooperation among all the churches is badly needed for our survival as a minority group in Bangladesh. This unity is to show the world that we are the followers of Christ who prayed “so that all may be one... the world may believe" (Jn 17:21).

The Episcopal commission always is active and very open to different groups and organizations, individuals who are in need of help or counseling to get rid of the different problems. For example, it deals with the broken families of inter-faiths and inter-Church matrimonies. Though there are many challenges to execute ecumenism properly in its being or to advance towards a real unity among all the Churches, there are still some proper implications as we see the results which give us the hope. 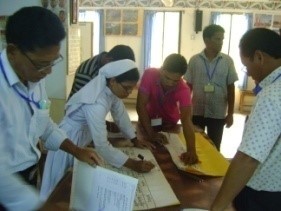 The participation in the various ecumenical seminars is the evident of the importance and value of this movement of unity among Christians in Bangladesh. Every diocese[2] organizes many programs, seminars, workshops, prayer services, bible sharing, gatherings, and get-togethers for promotion of ecumenism along with sending greeting messages and cards to the members of other churches and believers of other faiths as well. These programs mainly involve the youth of different Churches, in which the pastors and Church-leaders of different denominations share their spiritual experiences and give conferences on the various relevant themes so that the future followers of Christ may walk together in the Mercy of One God. Besides these, the translation of English booklet (of Christian unity Octave) into Bengali is being done to distribute to the diocesan coordinators, to formation houses, to different churches and ecclesial communities and to the organizations for conducing prayer services during Octave. It is really a very good sign that the participations in inter-church youth program, prayer services, and also in inter-faith seminars and dialogue are increasing day by day.

The very inspiring and positive sides of ecumenism in Bangladesh are i) the active collaboration and cooperation in working together among the members of the commission in National and Diocesan levels; ii) the accomplishment of activities according to the plan of commission; iii) the believers are becoming aware of the importance of unity and extending their open hearts to cooperate; iv) the good number of youth participants in training courses; v) the commitments of the Church leaders are increasing towards cooperation among the leaders and laity of churches and ecclesial communities; and vi) the feeling and awareness of spiritual benefits through the accomplishment of the unity among themselves. On the other hand, there are some other areas which are to be developed, such as especially it feels the lack of intimate relation among the coordinators because sometime leaders are conservative to protect their respective Church-rules, so this attitude has to be changed for further development of ecumenism; and the need to train more leaders, laity particularly youth-leaders so that the Church may face the challenges like the growing problem of religious intolerance, fundamentalism, communal hatred and threats to religious leaders.

Though in the above written details only inter-Church activity is mentioned, the interreligious programs like dialogue, seminars and meetings are also being actualized regularly. The Catholic Church of Bangladesh sees the future and hope in the progress made in the ecumenical movement. But there remains still much to be accomplished. We are to clarify our basic principles, our visions and goals, the sincere practice of the ecumenical programs and above all, the continuous renewal of our enthusiasm through our spirituality and firm belief in one Lord Jesus. We must allow the Holy Spirit to work among us because only the Holy Spirit, the gift of the Risen Lord, can help us to the conviction of the same faith in one Lord Jesus Christ.

[1] In Bangladesh, Catholics are the majority among all the Christian denominations. So, Catholics have to take the initiatives to call all the church-leaders together. In brief the Catholic Church leads ecumenical movement in Bangladesh.